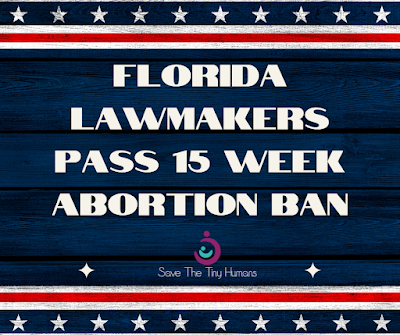 Abortions after 15 weeks may soon outlawed in the state of Florida. The news comes on Thursday night after the Florida Senate passed a monumental bill in a 23-15 party-line vote.

The bill is now headed to the desk of Governor Ron DeSantis who is expected to sign the bill into law. His spokesperson Christina Pushaw is on record saying “Governor DeSantis is pro-life and has voiced support for the concepts in this bill."

Starting July 1, doctors in the state will be prohibited from performing abortions after the 15 week mark if the governor decides to endorse this decision.

While the bill aims to protect preborn children, there are still some exceptions. These include "irreversible physical impairment" or death to the mother as well as fatal abnormality.

The abortion bill is often perceived as reasonable although rape, incest and trafficking are not current exceptions. Lawmakers believe that 15 weeks is enough time to make a decision before the baby reaches later stages of fetal development.  Senator Kelli Stargel strongly rejected the idea that a “child should be killed because of the circumstances in which it was conceived."

In closing remarks, the bill sponsor stated “I never dreamed I’d be standing here today, not just giving parental notice, but actually being able to save the life of babies that are past 15 weeks of gestation. God is so good.”